Well, it certainly doesn’t get any better than this.  I love spring in our little neck of the woods.  The weather is super and it’s starting to green up out there and time to get out into the garden again.  Last weekend my son Tom and I built a fence around a little garden that we were trying to protect from a backhoe of a dog.  Norman had taken to excavating in the middle of our vegetable garden and it looked terrible with all the bricks torn up from the edges and everything covered in dirt.  I’ve never seen as good a digger as this little beggar (not the word I originally used) has become.  His nose gets all dirty and he tracks mud into the house and Maggie was at her wits end with the carnage to her garden. 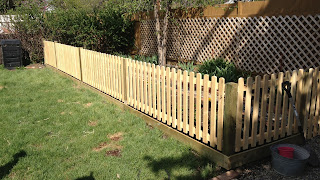 So what to do?  Why build a  picket fence with a little gate so that only we humans can get in there and the wild beast, backhoe, chainsaw dog is kept out.  He could probably jump right over it if he had a mind to, but so far so good and he seems to be resigned to the fact that it isn’t a place he needs to be.  Then he comes up to you and with his soulful eyes and wonderful floppy ears says he’s sorry with a nice kiss to the cheek.  Lord knows what else he’s been licking lately but we’ll endure his kisses regardless. 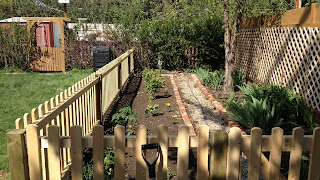 The fence totaled 41 feet in length and has the feature that if you want to remove a section of it you can just lift it out of its hangers so you can get a rototiller in there to work the soil.  It took a fair amount of work to dig the holes (thank you Home Depot Rentals) and then set the posts and pour in the quick cement.  Boy when they say it sets in 20 minutes they
weren’t kidding.  It seemed like it only took about 5 minutes before it started to thicken up and after setting the posts level it went solid.  It was a scramble.  But no wasted concrete, so we did well.  It was fun.

The little fence was Maggie’s Mother’s Day present from both Tommy and me and she was thrilled.  She also received a gift card for a garden centre in Lethbridge from our son and she took full advantage of that during this past week to buy everything she wanted and more.  It was entertaining to watch her with her tongue sticking out to the side of her mouth as she poured over the Green Haven catalogue picking out what she was going to buy.  She circled the items she wanted to buy and planned it all out and during the week planted to her heart’s delight.  What a great gift and the garden is spectacular already.  Now it’s mother natures job to make it all grow, but with this weather we’re assured of something wonderful again this year. 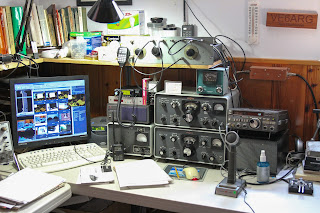 So this weekend, Victoria Day, we’re back out in the gardens getting them prepared for the summer.  The front needs some TLC for sure and we spent most of Saturday afternoon working out there raking and carrying the debris to the compost.  15 loads later we got most of it done and will finish it today, Sunday.  It’s starting to look nice out there and with some sprinkling of grass seed to fill in the area killed by the spruce trees it will be just fine.  I’m going to need a lot of grass seed though. 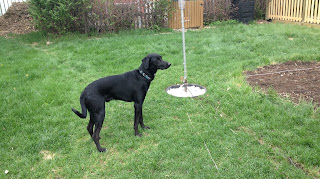 As many of you know, I have, as one of my hobbies,  been an amateur (HAM) radio operator.  I was licensed in 1965 and have been somewhat active ever since holding licenses in both BC and Alberta and a stint in California where I was active during the Loma Prieta earthquake in 1989.  It’s been a great hobby and I really enjoy talking to people all over the world.  The point is that I have an antenna in the backyard called a Butternut vertical and had never really installed it perfectly until last weekend.  Tommy and I took it from its original place in a centre garden area and installed it instead just southwest of that area and we took all the soil from the little circle garden where it used to be installed and put it into Maggie’s garden.  Then we smoothed it all out level with the rest of the yard and I seeded it this past week.  At the same time we put a radial system in around the antenna on the grass and that completes a proper mount with the base cemented into the ground.  The results were amazing.  Signals just popped out and the system works perfectly.  I’m very pleased with the results.

So today is Sunday and its dawned with a light overcast and I can hear the lawn telling me it’s time to be trimmed so I’ll leave you for now and hope everyone has as nice a day as I’m going to have.  Oh, and thanks for reading my blog and the great messages you are sending me about it.  They’re always appreciated.

Talk to you later,
Tom