This morning dawned in Pocatello cold as hell.  Now wait a minute… I didn’t sign up for this stuff.  Oh well, it does bring us back to reality and that’s for sure.  I’m writing this on Monday morning and Spider the cat is sitting on my left wrist keeping as close to me as she possibly can.  It’s snowing again outside and the trees look like a winter wonderland.  Southern Alberta is covered in a thick blanket of snow. 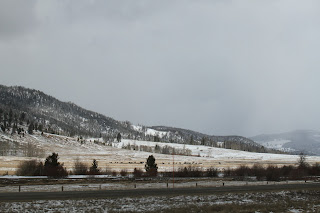 We woke up late after a good night’s rest and had to scurry to get everything loaded into the van and off we went at about 7:45 am and on our way at last. The roads were fine for the most part but the weather deteriorated progressively as we headed towards Canada again.  I turned on the weather channel on the ham radio and it foretold of worsening weather later on as well as snow and high winds throughout the route.  They weren’t kidding. 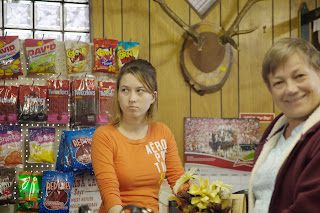 We crossed the Idaho/Montana border and when we got to a little wayward place called Lima, MT (pronounced like the bean) we stopped for breakfast at a place called Jan’s Cafe.  Now you talk about good old home cooking.  This is definitely the place to be.  It was filled with an odd assortment of characters and the best breakfast we have had on the whole trip.  There’s a lot to be said for a good breakfast that sticks to the ribs, so to speak.  I had ham and eggs with toast and hash brown potatoes and lots of delicious coffee that never seemed to run out.  The ham was half an inch thick and the size of a steak.  The eggs were dark yellow and perfectly cooked.  It was more than we could eat, but I got a good portion of it into me regardless. 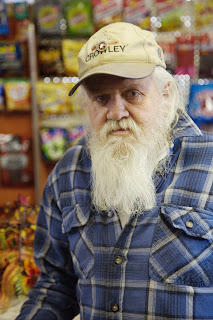 Maggie found some treasures for sale that just leap’t right out at her and she just simply had to have.  And I studied the characters around and enjoyed the surroundings in this rustic cafe.  We read the back of the menu where the history of Lima was told, so to speak, with the disclaimer at the end of it refuting everything said and told us that they have no idea as to why the place was called Lima, but it is, so there.

We got back on the road to worsening weather and a warning that the roads ahead were said to be bad.  We found that it wasn’t too bad as long as you used good winter driving methods and didn’t over drive the corners and going down the steep hills.  There were some slick spots, but nothing too serious until we got to the border.  The hills were long climbs and the scenery was breathtaking.  Maggie kept telling me that she couldn’t take decent photos if I was going to drive so fast.  Not much I could do about that, though.  Either we drive the speed limit when we could or we get home at midnight and that wasn’t in the plan.  I wanted to be home by 6:00 pm  with a stop in Great Falls to visit with an old friend and fellow ham radio operator, George Smith KC7OD, but that wasn’t going to happen as I couldn’t find him on the air while we were driving.  We talked to another ham who knew George, John W7JAQ on one of the repeaters and he told me that George isn’t often on 2 Meters but offered to call him for me if I wanted.  I told him I would call George another time and thanked him for the offer. 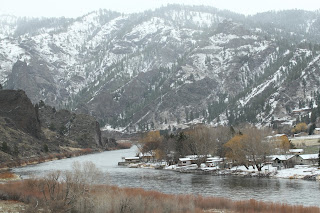 John also mentioned that he had talked to Blair, VE6AGH, an old friend in Lethbridge this morning and the weather is very bad on the highways with lots of blowing and drifting snow on the roads throughout the region.  So we knew what to look forward to.

The rest of the drive to the border was good despite the high winds and construction on the road.  It was cold in Shelby, MT just before the border when we stopped to top up with gas and to get a couple of snacks.  And then on to the border.

At the Sweetgrass/Couts border crossing there was a 15 minute wait in two lines and a friendly Customs officer who asked all the requisite questions and I told him I didn’t like the weather and should have stayed in California.  He replied, “Sorry sir, but I can’t do anything about the weather for you!” with a smile and a chuckle.

The road deteriorated with drifting snow and high winds across the highway and we made the 45 minute trip to highway 845 and turned towards home at last.  When we drove up the van was covered in a thick layer of ice and it looked like a coat on a woolly, shaggy sheep’s coat.  I couldn’t believe what it looked like when we arrived home and got out of the van.  It just fell off in chunks.  We arrived home at 5:45 pm right on time and according to our schedule.

So Norman the puppy was jumping up and down and the cats were rubbing up next to us and kids gave us hugs and kisses and it was warm and comfortable in our house.  Maggie made a great supper for us all and I watched some TV with my son and Angie and finally relaxed after 17 days of driving and seeing some of the most beautiful countryside in the world.

We’re finally home and safe and life is good.