We woke up early again this morning after spending a good night at the KOA and began the long trip to Salt Lake City.  It was a cool day with overcast skies and promised to be a good trip through mountains and long hills and sparse traffic and we would enjoy the ride. 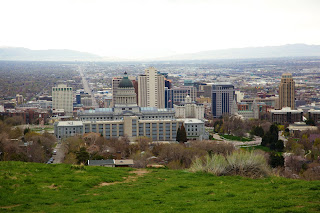 After about an hour, we stopped at a Denny’s along the road and had a fantastic breakfast and some much needed coffee.  We were served by an animated, middle aged woman who called everyone “honey” and had an unusual hairdo that seemed to be piled high on her head in a mass of curls and swirls and all manner of concoctions.  She was quick and efficient in serving both us and the dozen other patrons she had.  The food was wonderful and plenty of it for these starving people.  The coffee was delicious and welcoming as I had imagined it might be a bit difficult to get coffee in Utah.  I was proved wrong. 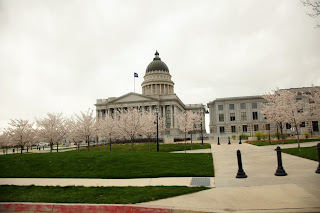 We arrived in Salt Lake City at around noon and drove to the top of a steep hill within the city near the State Capital to have a look at the surrounding area.  It was absolutely beautiful with the Great Salt Lake in the distance and the State Capital building and the city below.  Wow, what a nice looking place.

Afterwards we went down town to try and find Temple Square and indeed found it, how could you miss it?  Maggie remarked that the buildings took up a city block or more each and she was right with the tabernacle right in the middle of it all with its ornate, Gothic towers and beautiful facades.  We were only able to see a bit of it all though as traffic was brutal and there didn’t seem to be any real parking for us peasants unless you wanted to go into a parkade. 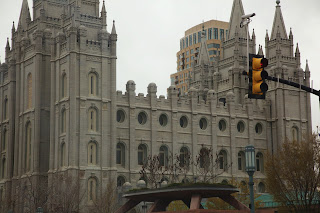 While I’m mentioning parking I should tell you that while trying to turn left on to a street I got in the wrong lane that led into a parkade I discovered that it was for exclusive members of the church and I couldn’t just get into the lane to my right because of the traffic.  So what to do?  I drove into the underground parkade and there at a booth was a young gentleman standing there with a finely tailored black suit and a white shirt holding his hand up to stop me.  I said to him, “How the heck do I get out of here?”  He told me I could make a u-turn right after the attendant’s booth so we escaped without having to become members of the LDS Church or anything.  It did provide us with a good laugh. 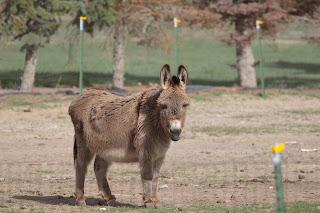 After wandering around for a bit, we decided it was getting later and we set the location on the GPS as Pocatello, Idaho and drove on.

We arrived at the KOA in Pocatello in the early evening to be greeted by some older, rather rough looking characters sitting around in a little lobby and they popped to their feet and welcomed us with as deep a drawl as you have ever heard and pointed us to our Kabin.  We were in K-1 down the road a bit.  The Kabin was a long walk to the washrooms, but was comfortable and there was a heater in it and that was a good thing although it didn’t keep the chill off us because it was cold outside. 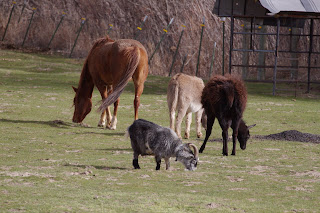 Across a field was a farm yard with an assortment of animals running around and grazing.  There was a horse, a mule, three donkeys, three lamas, a goat, two little dogs and an ostrich all playing in the same field.  They were fun to watch as the farmer came out to feed them all and they came running across the field to the trough and ate together except the dogs.  Now that’s a menagerie if I’ve ever seen one.  We were fascinated and got some shots of them as you can see. 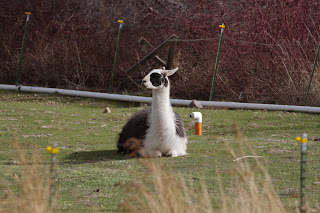 So this is Pocatello and tomorrow we’ve the long drive home through the rest of Idaho and Montana and finally across the border to Alberta and the end to a long trip.  The weather is getting decidedly cooler so we need to crack out the winter clothes again and be prepared for snow on the highway. There’s a decided winter chill in the air here in Pocatello so we are going to snuggle down and get a good nights sleep.

On the way home tomorrow. See you then…