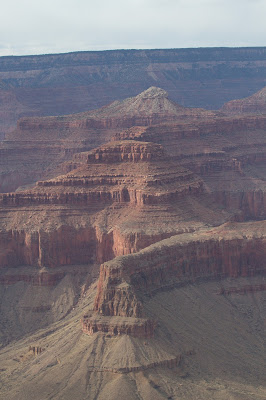 We woke up early this morning.  The sun was high in the sky and the air was clear and blue as blue could be.  We loaded up and headed across the highway to find a place to eat and what we found was a cafe with some of the best food we’ve eaten on the whole trip.  Bacon and eggs and some home made bread with home made jam to go with it.  The coffee was hot and delicious and we topped it off with orange juice.
It was called Byler’s Amish Kitchen and was originally begun in by a young couple that left the Amish and moved to .  The restaurant was called Hillbilly Rays and when they sold it they moved to and called their new restaurant the Lazy JB and when Gerry and John retired their kids took it over and re-named it to Byler’s Amish Kitchen.  A unique feature in the restaurant other than the amazing food was the big windows all along one wall overlooking a collection of birdhouses in an old tree.  Covered with every kind of bird you can think of it provides huge entertainment value and we enjoyed looking at them feed as well as a very big striped cat that made an appearance to startle and scare them away for a moment.  He disappeared under the cactus in the background and we didn’t see him there again.  We did see a couple of bush bunnies though and they were eating contentedly with the birds all around them even the busy courting their loved ones with their amazing dances.  What a great place out of the way and in rural at its best. 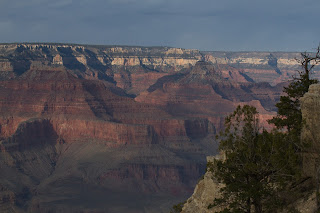 And so a stop for gas at the Shell station across the street and on to Williams, AZ and the beyond.  The trip was without incident and we arrived at the gate for the Grand Canyon just after 11:00 am and went straight to the parking lot and on up to the rim of the canyon.  All we could say was WOW!  No matter how many times you look at pictures or watch television programs, you would never be ready for the awe inspiring depth of the canyon from this vantage point.  It is 3,500 feet deep to the running below and it’s simply breathtaking in its beauty.  Never before have I seen such grandeur in such magnitude.  This is truly a wonder of the world.
We wandered the rim for an hour and then had some lunch at the van and off on the shuttle buses to see the rest of the rim to the west.  The buses are comfortable and filled to the brim with people.  They stop at a dozen or so stops along the way and we got out at many of them to see the amazing diversity of the canyon as it meanders along.  Every stop has something else to see that is special. 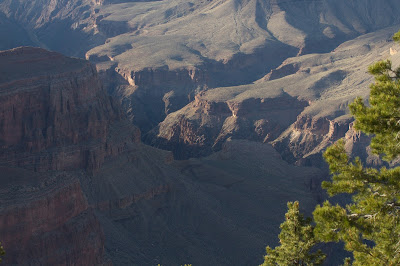 We were there for near sunset and the lighting was perfect and we got back to the van at around 6:30 pm and it was already getting dark.  We were a bit concerned that our camping spot would be taken or lost but we scurried back the 50 miles to the KOA at Williams and although the store was closed we were treated to an welcome package and the nicest Kabin we have stayed in yet.  The restrooms were spotless and it felt so good to finally have a shower and get clean again after our busy day at the canyon.  We dropped off to sleep like we were dead and aside from a minor asthma attack for Maggie which she took care of we slept well.

We woke up early again the next morning and headed up Highway 64 to the again with the intention of driving along the rim on the highway through the park and stopping at the viewing areas.  We did just that and had even more spectacular views of the canyon this time including an old observation tower that is near the east end of the park.  Then on to the rest of our trip. 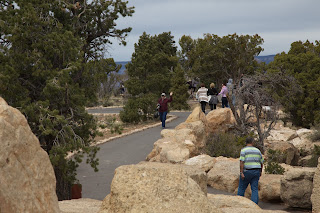 After leaving the park we drove for about 35 miles and got to highway 89 north to   The road was great with 65 being the normal speed we were able to make with some slower portions through the towns and villages along the way.  At the junction of highway 160 east we took a jaunt to the town of City for lunch.  I asked some of the locals about the road to Page and they informed me that the road is closed due to a slide but we can get to where we want to go by travelling on 89A to the west.  We drove the 11 miles back to the junction and carried on through some rolling hills and changes in vegetation including red desert scrub and high mountain pines.  It was a pleasant drive and we enjoyed it very much. 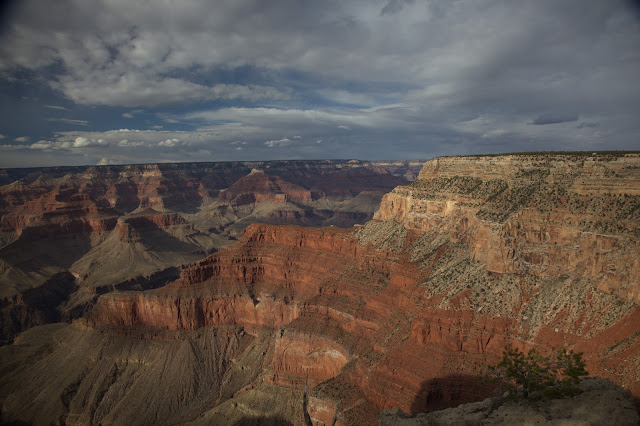 We arrived in Panquitch at 7:15 MDT and met the owners Dave and Kathy Cooper at the Panquitch KOA.  They told me about the sewer having problems so there is a backhoe parked next to the washrooms and to keep the water running because it freezes at night and the pipes would freeze up.  I assured them that we would be careful and they showed us to our Kabin and it was great.
So that’s day fourteen and fifteen completed and tomorrow we’re on our way to and then on to .