↓
Home Menu ↓
Home→Uncategorized→Wednesday Day 13 on the Road to Phoenix
The long climb to the top of the mountains between and was worrisome because of that damn yellow engine light on the van.  Regardless she performed perfectly on this test of endurance. 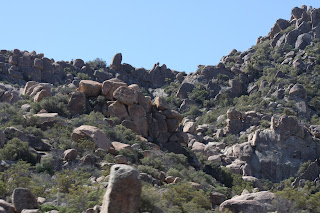 The terrain changed from the lush, tropical of the coast to one of an arid desert literally within minutes of leaving the city.  It was punctuated with a strong cross wind that was a bit unnerving at first as it came in gusts of 50 to 70 mph.  I turned on the weather channel on the ham radio and listened to the forecast and it confirmed that there were going to be huge winds along the highway with occasional dust and sand storms.
Once over the coastal mountains we were out in the middle of the with miles and miles of sand dunes and dust.  The road was good and Maggie was photographing anything she could get her eyes on.  Rocky outcrops showed up every so often but mostly it was flat desert.  This carried on for ever it seemed. 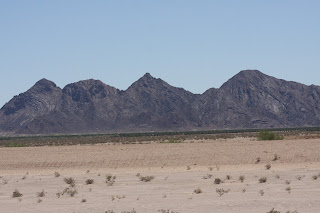 One note of excitement was when we were stopped by the Border Patrol at an inspection station where a dozen large, serious looking, uniformed and armed men were standing around and the fellow at the station we were going through said good afternoon and looked in our van and passed us through with a jolly “Have a great trip, sir!”.  It was the only real excitement and we only stopped once for a restroom break along the way out in the middle of the desert.  I got a few shots of the desert and some cactus.  Maggie was snapping away, having a great time getting to know her new camera, my Canon 7D.  She was in her glory. 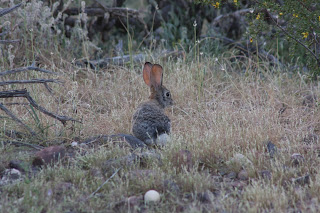 We arrived in around 4:00 pm and my nose correctly identified a Wal-Mart and we went in to buy some groceries.  The place was big and the aisles were full with a huge selection of all types of food.  We filled up with what we needed and had an animated chat with the woman at the checkout about how Wal-Mart needed educational professionals to teach their people.  She was a 60’s something with bleach blonde hair and more makeup than she really needed, but the most interesting feature were her earrings which were red, plastic crystals hanging six inches down from her ears and a matching hair band.  She was pleasant to talk to and was a bit addled in the way she handled the groceries, but another interesting person that we’ve met on this trip.
We arrived at the KOA in at about 5:00 pm and got settled into our cabin or Kabin as they call them and Maggie made supper of steak and potatoes.  It was a comfortable place with clean washrooms and showers. In the morning when I went to brush my teeth I was faced with a barrier in the washroom and a grumbling franchise owner on his knees trying to lift the paint off the floor of the facility.  Apparently during a recent inspection KOA had objected to the floor covering and he had to replace it with tile.  The regular garage floor paint wasn’t good enough.
So that was our day on the road to .  Tomorrow the .
See you tomorrow…