I should start right off by telling you that this is the slowest internet connection I have ever used since the dial-up days of old.  But regardless, it’s been a good day on the road.  We woke up to a cold day with lots of clouds and got on the road around 7:00am and headed south on 101.  The clouds were not too thick and the sun was coming up so we thought maybe it was going to be a nice day.

So much for thought.  It rained like hell all day and the roads were slick and there was a thick fog to put up with as well.  But it was still a nice ride and Maggie got lots of shots through the windshield wipers and did a great job.  I stopped as often as I could for both of us to gather up some photos and we were able to accomplish what we wanted to for the most part. 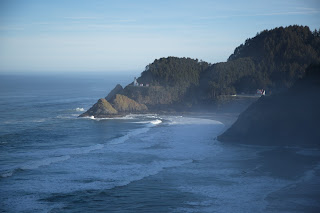 The engine light was still on and that kind of bugged me but everything was running beautifully on the van and I got to play radio a bit but mostly kept my eyes on the road.

We stopped in Crescent City and went to a wonderful restaurant called Fishermans Fish and Chips.  The food was amazing and the service exactly what you would hope for.  Maggie had cod and onion rings and I had calamarie and chips.  Certainly no complaints for these hungry travellers.

We drove the rest of the day to Eureka and in a little place called Trinidad Bay got some much needed gas.  Then on to Eureka only a dozen miles further on.  When we got here we met the people that run the KOA and they were really welcoming.  Maggie and the young woman in the office hit it right off and started talking about quilting. 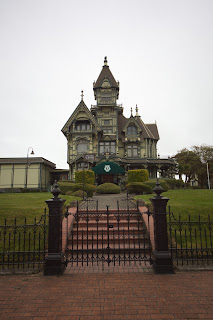 We decided to drive into Eureka and see what the town has to offer.  We spied an amazing building from the turn of the last century that is ornate and beautiful.  It’s a private club now and the old town part of town has a lot of restored buildings just waiting for some guy and gal like us to snap images of them.  Nothing was open in town as it was Easter and everything was locked up except Walgreen’s.  Maggie wanted to go in so we did the once around and then got out of there.

And the best thing of all is that while we were driving around Eureka the engine light went off, the miss went away and the van is running perfectly again.  Maybe we had some funky gas in it or something, but it works well now so that takes a worry off my mind.

So on to San Francisco tomorrow early and we’ll spend both half of Monday and nearly all Tuesday there doing some shopping and sightseeing.  It’s been a great trip so-far as you can tell from reading the blog.

Talk to you tomorrow,
Tom