Wow, what a long day.  Happily only two things happened to pinch the day, but they were both serious enough to remember.  One sad and the other concerning.

We left Spokane KOA at 7:00 am MDT and drove hard and long all day too Waldport with the occasional stop for gas a couple of times and some lunch.  I noticed that the engine wasn’t running as smoothly as it usually does the other day and when we got to Eugene Oregon the check engine light came on.  The engine still had lots of power and it ran well but there was a bit of a miss I noticed.  We will have it checked out as soon as we can.

The other incident was a sad one as I mentioned and it was a traffic accident on the freeway in Portland with two bikers who were obviously cutoff in the outside lane at high speed.  Their destroyed bikes were about 150 yards down the road beyond where they were lying crumpled up against the wall.  It had just happened a few seconds before we got there and already the traffic was bunched up but no EMS were on scene yet.  They were dressed in leathers and all the correct riding gear, but it would have been a miracle if either one of them were alive after hitting the wall at 70 MPH.  Sad is the least of the story. 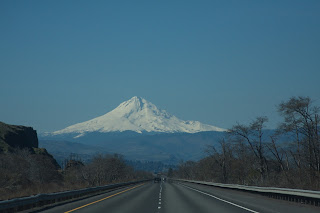 We had a great drive otherwise and the last part of it especially through the rural mountain roads for the last 50 miles or so.  It was pure deciduous rain forest with moss growing thick as a blanket all over the trees overhanging the roadway.  Lots of winding turns and an excellent view of the beautiful homesteads along the way.  I could live here in a heartbeat and so could Maggie she said.  What a beautiful place.

While we were in Portland, we went to one of my favorite places and that was Ham Radio Outlet.  I have had my eye on a new radio for the shack and they had one on sale as well as some other things that just were jumping out at me to buy.  I can’t wait to get it all going when I get home.  That place was a ham operators candy store. 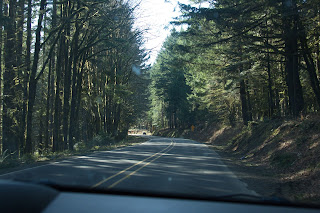 So we got to Waldport about 5:20 pm after a long day on the road and Maggie made some raw vegetables, cheese and smoked meat for supper and it was delicious.  Nice and light and perfect before we went for our walk.  The campground is right on the inlet to Waldport and has an area adjacent to it that is a bluff overlooking the area and the ocean below.  I went up there and waited for the spectacular sunset to happen and I certainly wasn’t disappointed.  I met some people up there from Eureka Montana and he’s in the construction business and she is from Cranbrook.  He is working mostly in Alberta right now because
business is better there.  Nice people to talk to and get to know. 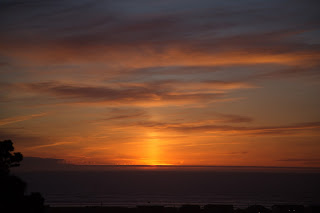 So that’s the scoop from Waldport, OR.  We’re on our way to Eureka, CA tomorrow and down the Oregon coastline all the way.  We’re looking forward to it.  The temperatures and weather have been perfect with clear blue skies and bright sunshine.